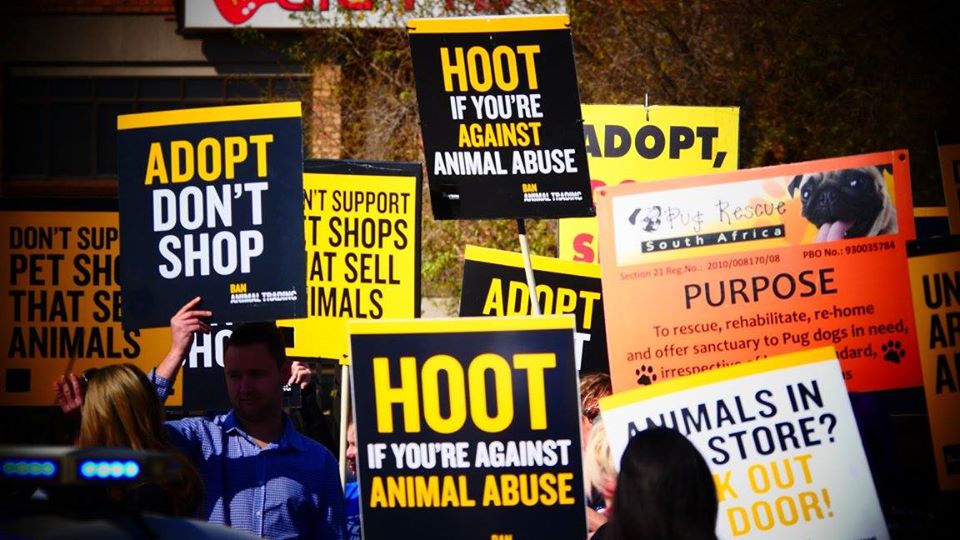 Our long-term vision is to end animal exploitation through facilitating positive and meaningful change, recognising that change is incremental, and created through awareness and education and legislative enactment.  We strive to raise awareness in order to facilitate long term change, by challenging the status quo in a legal, ethical and professional manner.

Challenging the status quo encompasses, but is not limited to, challenging norms, traditions, cultures, past practices, outdated beliefs, and any form of policy-making, legislation, and profiteering from the exploitation of animals, to achieve changes in attitudes and beliefs, and ultimately, policy and legislative changes.

We started in Johannesburg and Pretoria in 2014 with a focus on the pet trade, which is when our “Adopt Don’t Shop” campaign was born.  Most of our efforts at the time were spent creating public awareness around the massive problem of unwanted cats and dogs putting strain on the animal welfare system’s limited capacity. We rallied the animal welfare community and the public and organised many protests outside various pet shops selling companion animals … and so our name became recognized and our mission started to grow.

Today BAT has widened our geographical reach from Gauteng only to include sub committees in Kwazulu Natal and the Eastern Cape, and are constantly increasing our network of trusted volunteers on various project teams.  We have active animal rights campaigns spanning all the industries that abuse and exploit animals.  Compassion in Action is the slogan we live by, and our varied campaigns serve to provide our passionate and heroic supporters with a platform upon which to become directly involved in taking action and, in so doing, bringing about change to prevailing norms and standards as well as to outdated and inappropriate legislation. BAT views ongoing educational initiatives as the most crucial mechanism by which to achieve real progress and maintain real change. When people know better, they do better, and when they do better, they become the catalysts for real change in society.